A trip to London today to see a friend ended up in the National Portrait Gallery, in an attempt to escape from the rain (and boy, was it raining today: I'm still slightly damp two hours later).
Now, I have been to some of the big art galleries in the world – the Prado, the Louvre, the Musée D'Orsay, the Met in New York... but I have never made it to several of the major London galleries, despite only living 40 miles down the road. I know, I know, someone should be spanked.
Anyway, this was my first visit to the National Portrait Gallery. Some of it was great. The Tudors and Stewarts galleries were best taken with a hefty dose of irreverence, the photographic exhibition was fantastic, but it was wandering into the early 20th Century gallery that I came across the ultimate Spanko painting. 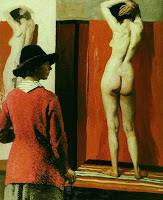 Amazing, isn't it? Now I know I'm a pervert and all that but seriously – she's standing in the corner hands on head, bottom suspiciously red. That's what the painter intended that we see, right?
Posted by Eliane at 06:21

Do you think the staff realise that the people buying the postcard of that photo in the shop are all spankos?!

I so love that painting - and the NPG as a whole, possibly my favourite London gallery.

As for your comment that "I'm still slightly damp two hours later" - I'm not saying a word...

Another piece of evidence for the existence of the spanko interest throughout antiquity.

Whatever is Abel on about regarding the "slightly damp" comment?

@KFG - read the end of the first sentence of the post and you'll see!

That's priceless - I so wish we'd analyze that in History of Arts. Who's the artist and what's the title, by the way?

Someone asked who the artist was in this painitng, and SHE is Laura Knight. The painting is a self portrait! This was unheard of in its time--a woman painting nude women. 1913.

Eliane, I haven't been to the NPG for more that 25 years, then it was wonderful, to my shame I don't remember that self-portrait.
Yes the weather is pretty awful at the moment.
Warm hugs,
Paul.

I was perving on that on Friday! Great minds!

LOL, you're so funny! Thank you for introducing me to Dame Laura Knight, though. I love her work!

Maybe we can start a craze, see my two November posts on the same theme http://masterfulstrokes.blogspot.com/2009_11_01_archive.html