Places Not To Take Your Mother

So, I had a little expedition on Saturday. I discovered the the bus that was diverted so that the nearest stop was about a mile from me, had been temporarily undiverted, and so the nearest stop was only half a mile away. After a very snowy, slippy, and rather scary walk down some very steep hills, where I passed the time by amusing myself laughing at all the idiots in wheel spins trying to get uphill and then having to give up and roll back down, I made it to the bus stop and into town. There I met my mother, who had come on a different bus from her neck of the woods, and we had some lunch and a brief wander round the shops.

Unfortunately for me, as we walked passed Ann Summers, I spotted a pair of knickers in the window that I had been coveting and were now on sale for £6. So I veered off and my mother followed me. Now, my mother knows about the whole spanking thing, but as I walked over to the frilly knickers she gave me the most indescribable look. At which point I told her in no uncertain terms to go to the card shop (our destination before the detour) where I would join her in a minute. Note to self, never take your mother into Ann Summers.

Can't think what her problem was with these knickers, really! 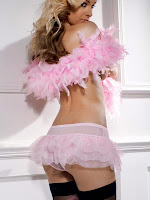 Edit: I should add for my non UK readers that Ann Summers is a UK store selling lingerie and sex toys. And is often more famous for the latter than the former... this is one of the main reasons why going there with your mother is a bit weird ;-)

LOL!! I give you credit for even approaching those knicks! I'd've stuck to towels or something totally innocuous if I were with my mother!

I can't see a problem with those knickers, either. They'll go beautifully with your lovely pale skin tone. (Though may clash when your, uh, cheeks grow rosier. That's to be discovered, though.)

Seriously, there're worse things you could have been buying in Ann Summers.

I was in there yesterday wished I'd seen those knickers.

Good color-- gives the tops something to aim for. Only the most discerning can actually stop at exactly that color.

I hope you bought the feather boa, too.

Eliane, not an easy colour to match, I usually end with a much deeper red. :D
Warm hugs,
Paul.

Oooh prettyness - I have some similar ones in white with glittery bits :)

They are pure loveliness in knicker form ...I want some, so what a pity that I'm only seeing your post when I know the next chance I'll have of getting to Anne Summers is well over a week away and they probably won't have any left...unless...perhaps... I could ask my mother to go for me? What do you think? ;)

Oh my... those are absolutely Lovely. The color is fantastic and I absolutely adore the ruffles!!